Notes on Organising a Funeral

In the last few years I’ve organised the funerals for my mother and my father. As I was organising these, it struck me that this is one of those things in life that you don’t get involved with in a casual way. On the whole, only a small number of people organise a particular funeral, and so it isn’t something that you have the experience of being involved in from the sidelines. When you have to do it, you have to do it, without much to draw on.

So, I thought that I would make a few notes on my experience for the benefit of others. Obviously, my experience is limited. I organised a couple of secular cremation-based funerals in England, and I appreciate that there are lots of variants, in particular that some religious traditions support the idea of funerals happening within a day or two of the death; what I have to say may be less relevant to such situations.

I will focus on the funeral organisation itself, here. There is a process before that of registering the death, which needs to happen within a few days of the death occurring. In both of the cases I’ve been involved with, the deaths have happened in hospital, so I received a lot of guidance from the hospital about this; I can’t really say anything useful about what happens to deaths outside hospitals. The important part of this for our purposes is that the registrar will give you some paperwork that you will need for organising the funeral: importantly, for cremation, a form from a doctor certifying that there are no battery-powered implants etc. remaining in the deceased.

The starting point for arranging a funeral is to contact a funeral director. I used Baguley Brothers, and I can highly recommend them within the Nottingham area. You can make this initial contact before registering the death, but the funeral can’t go ahead before the registration. I just waited until I had sorted out the registration process. I phoned them and made an appointment to go into their offices; I suggest that you allow a good couple of hours for this appointment, it will probably only take about 45 minutes but it isn’t something that you want to rush.

After this meeting, there are a number of things to sort out. You will need to come up with a structure for the funeral. If you are having a standard religious service, this might be fairly clearly prescribed; otherwise you will need to decide upon a sequence of readings, music, etc., and give this to the funeral director so that they know what is happening. The funeral director will let you know how long you will have for the funeral; at the crematorium I used it was about 35 minutes, which sounds short but is about right. My experience was that it was harder to find people to do readings and tributes than I had imagined; a lot of people are either fearful of public speaking in general, or find it hard to imagine speaking coherently at such an emotionally charged event.

I have focused here on the advance work of arranging the funeral. But, I would like to mention a couple of things that surprised me about the day of the funeral itself.

So, that’s that. I’ve been wanting to write this for a while. Organising funerals is difficult, and one way to make them a tiny bit easier is to have some idea of the decisions that you will have to make around a funeral. I hope that this is useful to some people at a difficult time in their lives.

“Who Bought you That?”

I’ve noticed a communication difference between people like me, who grew up in small families without much of a tradition of present-giving, to people who grew up in big, richly-connected families where dozens of people exchange presents for Christmas and birthdays.

People in the latter group often ask the question “Who bought you that?” when enquiring about some day-to-day object—a scarf, a watch, a pen that I have. I always thought that this was a weird question—why on earth would you imagine that someone bought it for me? But, of course, to people from such a background, the idea that you would ever need to buy such day-to-day tchotchkes is weird. For their whole lives they’ve never had any need to buy all these little bits and pieces, every since childhood they’ve had an endless supply of little day-to-day objects in the form of presents from cousins and great-aunts. Of course, they are in an economically neutral position, as they have had to keep up their part of the exchange.

Posted in Changes of Perspective, Communication, Family, Observations | No Comments » 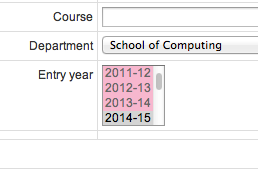 No, I don’t know either…

Posted in Computing and IT, Human-Computer Interaction | No Comments »

I have an atheist TV! 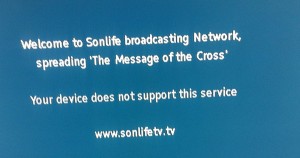 Using an iPad for any kind of productive task feels like working in a room without a desk, with no room for the messy-creative ad hoc organisation of material, and with a nagging person standing at your shoulder telling you to “put that back in the right place” every time that you have (even momentarily) finished with something.

Posted in Computing and IT, Design | No Comments »

This is the most parochial thing that I’ve seen in my life. The author being “Trevor, near Redhill” just makes it perfect. 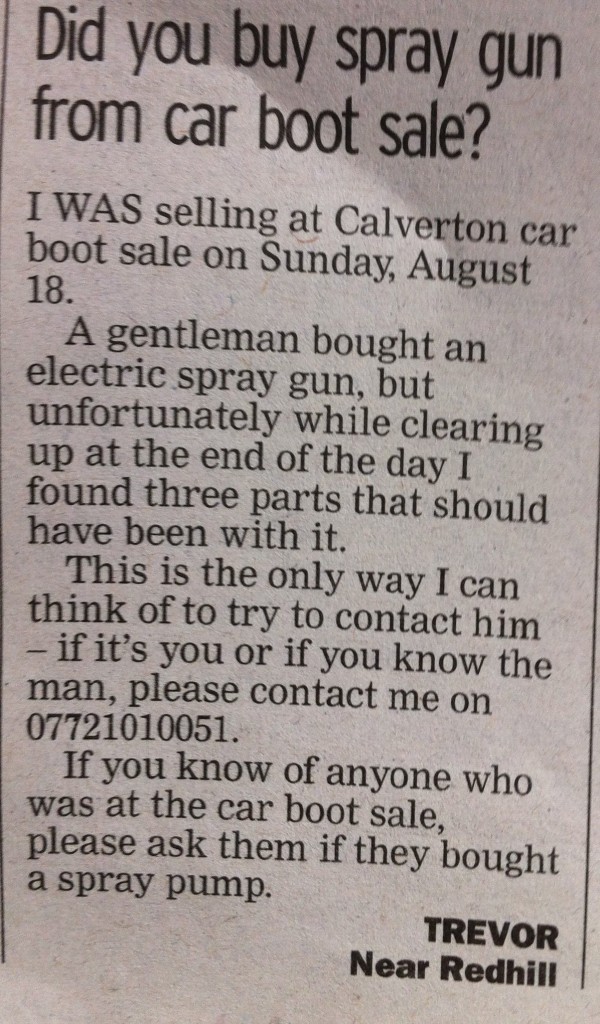 Posted in Found Objects | No Comments »

Posted in Found Objects | No Comments »